Unscheduled, Beltane is a Portal

When it comes to celebrating the ancient holidays of my Ancestors, I find it difficult to align with the Western Gregorian calendar. The spokes of the Wheel of the Year -- from Ostara through to Imbolc -- do not adhere to the calendar of Christian colonizers, but rather align with a sacred force that could never be oppressed -- the Sun and its progression through the Ecliptic.

The Ecliptic also forms the backbone of Tropical Astrology. When we draw this progression through the Equinoxes in two-dimensional space in relation to the Equator, the Sun creates a sine wave. (Yes, that’s where we get the word “signs” in Astrology.) Visualize this with me: We begin at the Equator at the Spring Equinox (Ostara), moving up to the height of the Summer Solstice (Litha). Then we descend towards the Equator to the Fall Equinox (Mabon) -- the balance point in the middle of the sine wave, ruled by the scales of Libra. Then, we drop down to the darkest depths of the Winter Solstice (Yule), and finally we rise back up to begin the next cycle with Spring. 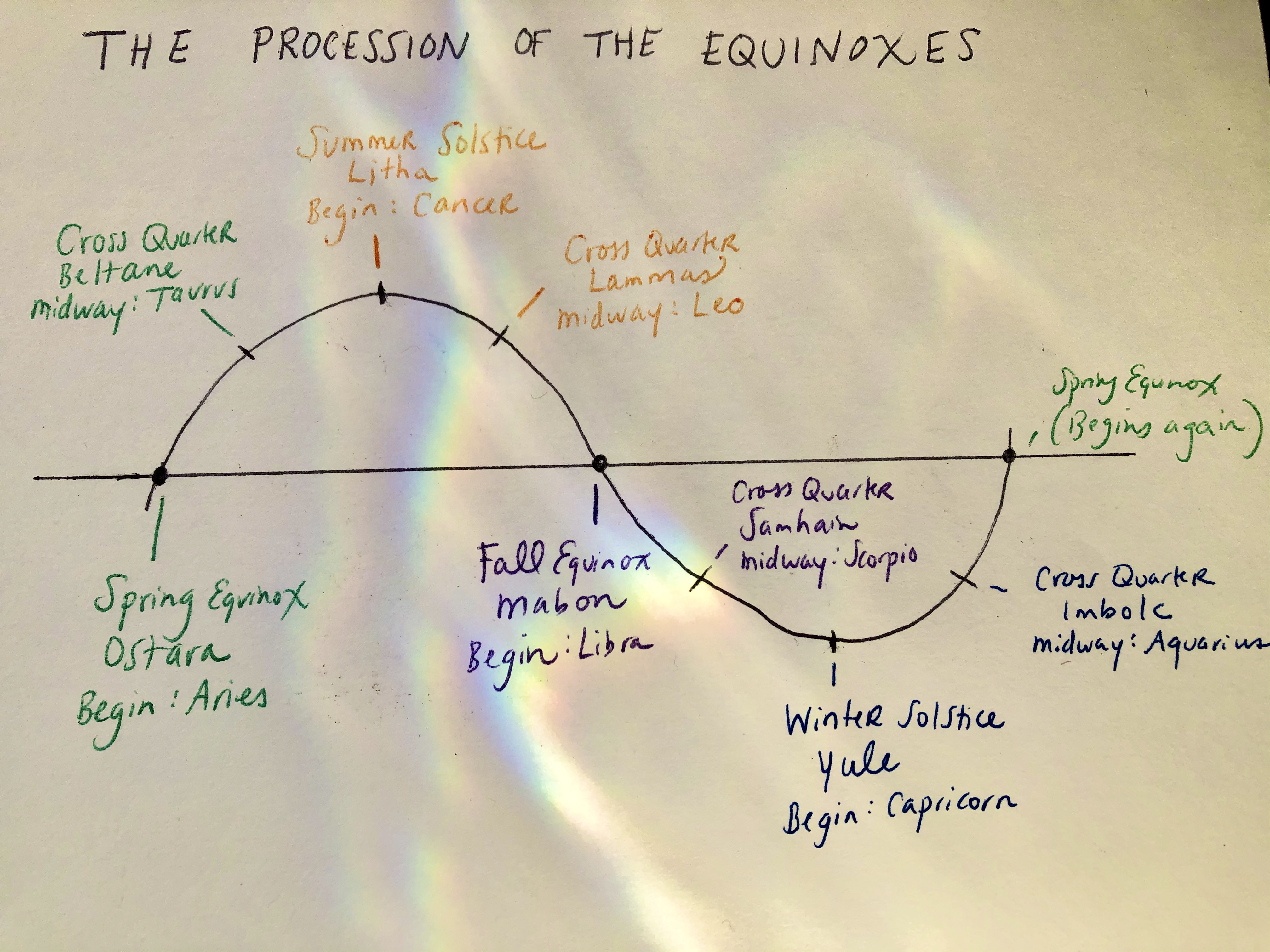 The seasons in between -- the liminal Beltane, Lammas, Samhain, and Imbolc -- were never celebrated on the “first of the month” of a once-arbitrary calendar. They were celebrated at the cross-quarter days, which are the days that fall exactly midway between each Equinox and Solstice. This midpoint often occurs near a Full Moon. “Technically speaking”, Beltane would be celebrated on the cross-quarter day -- which is May 4th this year -- or on the upcoming Full Moon.

So, with this in mind, when I awoke May 1st, yesterday, I did not feel ready to celebrate, especially since it was grey and rainy here in New York. I spoke to my culturally-rooted from Rowan about the timing of their Beltane celebration, and they shared that although the cross-quarter day is the traditional holiday, they like to maintain festivities for several days-- from the eve of April 30th through to the Full Moon.

I resonated with this idea of Beltane not being bound by days, but rather as a portal to mark the Turning of the Wheel. Opening up, I came to acknowledge this shift as a doorway that would present itself and invite me in -- uncontrolled by the calendar or notions of time. Instead, I would step over a threshold to sense a certain dewiness in the air; a waft of Lilac perfume enticing me into memory; the gentle burnt-orange of oak buds as they burst into green.

That night, Sunset calls me outside, the Earth drenched in an embrace of Spring rain. The sky paints with the orange and purple of twilight. Azaleas glow with dew; Jonquils, Hyacinth, and Violets guide me on my path -- their scent wet and dripping. They lead me to a Morel mushroom -- a singular mycelial bloom that appears each year in my yard, who I would never dare pick. This is a reminder of magic afoot.

Then, I hear the hum of a Bleeding Heart and feel the beat of my own. A bumble bee drinks the nectar from the heart of Spring. This is Beltane -- the core, the heart, the apex of this liminal season of between. The Portal has opened for me, suspending time and beckoning. 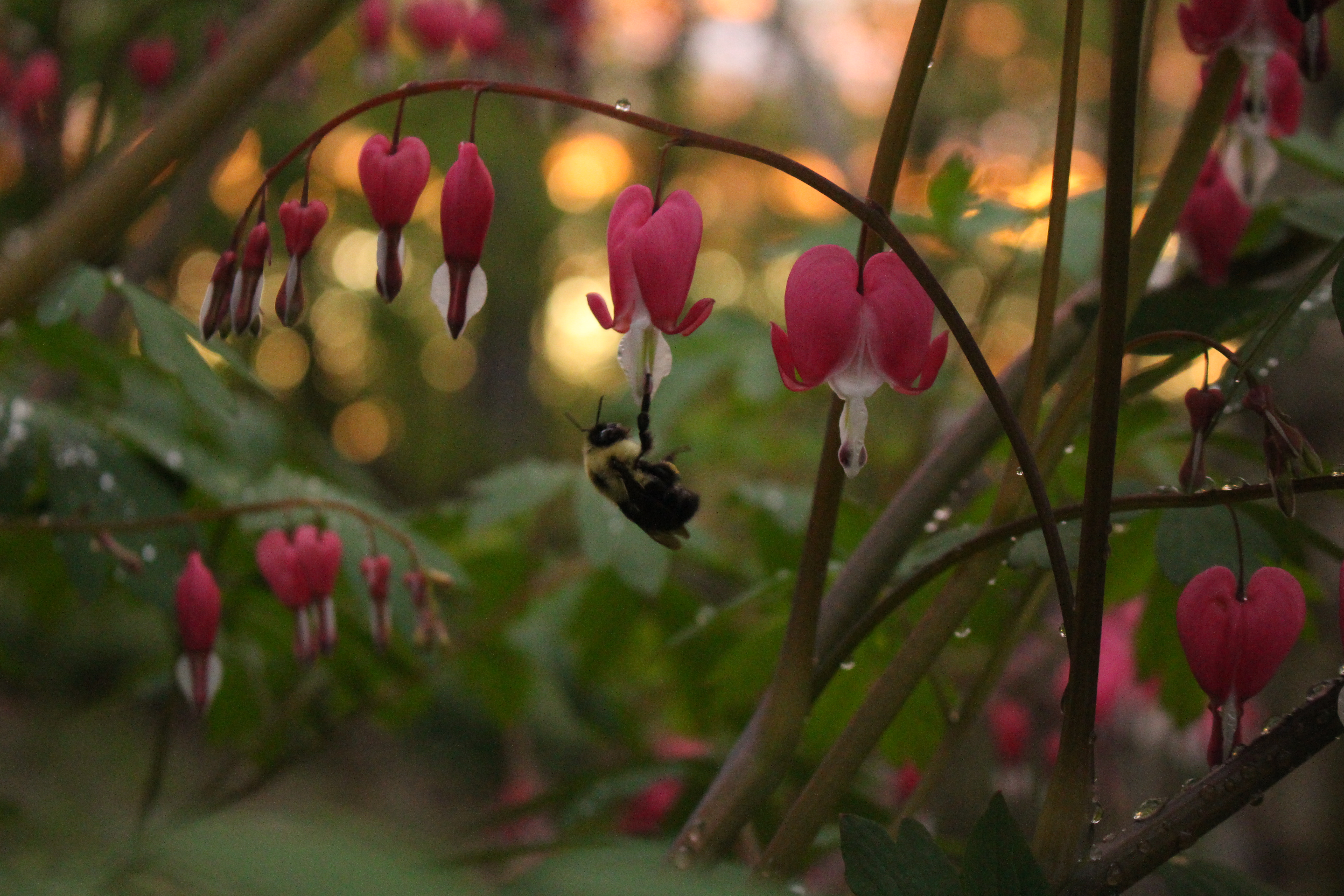